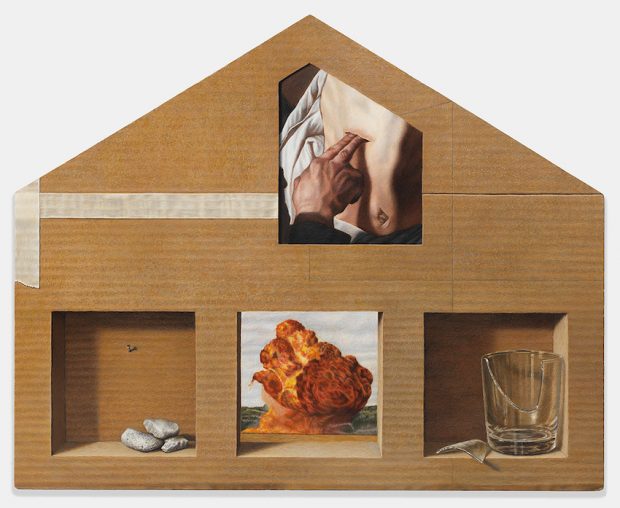 My work is concerned with observation and representation as contemplative activities, and with mark-making as a means of creating a rich, complex surface that embodies human touch.

I want my paintings to function as both images and objects, and my surfaces are worked so as to be both tactile and illusionistic: describing space while drawing the gaze to the painted surface. To this end, I often work in egg tempera, which encourages a process of repetitive mark-making to build up a dense surface of short strokes that define surface while recording the hand’s movements over time. These surfaces tend to embody a certain intimacy intended to be encountered at close range, so that the viewer is encouraged to focus on the parts and to search for relationships among them.

The subjects I depict reflect this concern with the physical as the locus of spiritual inquiry. Ordinary objects – a carpenter’s plumb line, corrugated cardboard, or a broken glass – are frequently placed in relationship to more extraordinary imagery culled from art history and current events. Probe, for example, reproduces a detail from Caravaggio’s The Incredulity of Saint Thomas as if it were taped onto a piece of cardboard that bears a news photo of the burning of the Deepwater Horizon in 2010. This image of Thomas placing his fingers into the wound in Christ’s side appears repeatedly in my work, along with the results of everyday mishaps and environmental catastrophes. These are images of wounds, of doubt and belief, and of weakness. Fragility appears in these paintings as a fundamental aspect of human experience. The plumb line also appears repeatedly in my paintings. A simple tool used by carpenters and construction workers to determine if walls and columns are perfectly vertical, the plumb line can also be seen as an exacting standard against which we judge our work. Is it plumb? Is it true? Will it hold up?

Steven Carrelli was born in Canton, Ohio, in 1967.  He received a BA in Studio Art from Wheaton College in 1990 and an MFA in Painting from Northwestern University in 1995.  As a 1995-96 Fulbright scholar, he studied egg tempera painting in Florence, Italy.  Carrelli has returned to Italy on many occasions to teach and to work.  He lives in Chicago with his wife, the painter Louise LeBourgeois, and he teaches at DePaul University.

Carrelli’s paintings and drawings have been exhibited in many solo and group exhibitions, and they have appeared in a variety of publications, including The Chicago Sun-Times, The Chicago Reader, New American Paintings and Time Out Chicago.

All paintings are egg tempera on wood panel. Drawings are graphite on paper.

There are no upcoming events.